On this splendid tour, you'll soak up the glamour of both the French and Italian Rivieras. We'll head to the charming French village of Menton and discover medieval Dolceacqua in Italy. Next, we explore the town of Sanremo, with its exquisite gardens and Russian Orthodox church. A visit to stylish Monte Carlo, playground of the rich and famous, is also included and if you fancy some time to relax, golden-hued beaches are never too far away. 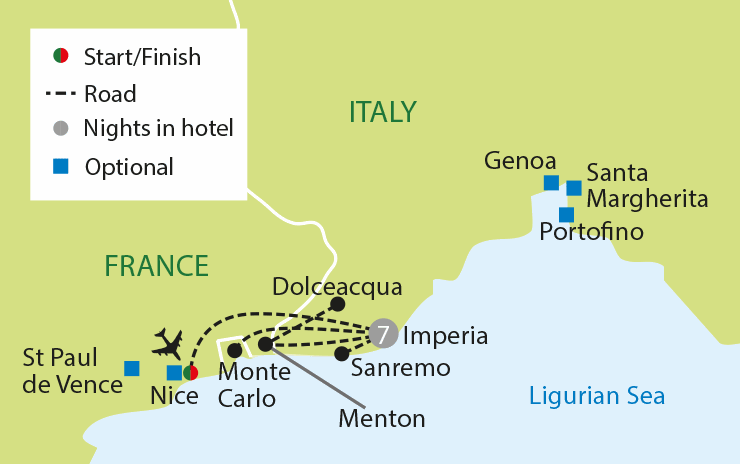 Make your own way to the hotel where your Tour Manager will meet you for your welcome meeting that evening. Meals included: D
Next day

Today we'll head to Menton in France, a coastal town on the Cote d'Azur close to the Italian border. Its streets are lined with pretty pastel-coloured houses and we'll have time to take a stroll and admire the 17th century Basilica of Saint-Michel, one of the finest baroque churches in southern France.
Next, we'll cross the border back to Italy and stop in medieval Dolceacqua, made up of two beautiful villages connected by a stone bridge.

Santa Margherita is one of the most elegant resorts on the Italian Riviera. You can discover its charm on our optional excursion, which also includes a visit to Portofino, which we'll reach by boat if the weather is on our side. What used to be a quiet fishing village is now one of the region's most exclusive resorts, filled with designer boutiques and a fine selection of restaurants and bars. Take a walk among its maze of streets to the Church of St Giorgio, which is close to the harbour. Perhaps take a seat at a café here and enjoy spectacular views across the bay as you sip a coffee or enjoy a chilled glass of wine.

Located on a wide, sheltered bay, Sanremo is delightful to explore. We'll do this today on our included tour in the company of a Local Guide. We'll stroll through its charming Old Town, where a maze of lanes twist their way down the hillside. We'll also admire a colourful display of exotic blooms amongst its exquisite manicured gardens and well-kept parks. Down by the seafront, another highlight is a Russian Orthodox Church, similar in design to Saint Basil's in Moscow.

The stylish principality of Monaco is a sovereign state that has been ruled by the Grimaldi family for more than seven centuries. It boasts luxurious hotels, exclusive restaurants and the highest number of millionaires per square metre than any other country in the world! The district of Monte Carlo is the sophisticated playground of the rich and famous, renowned for its famous casino, exquisite gardens, opulent boutiques and a grand harbour filled with expensive yachts. We'll discover these glamorous sights on today's full-day included excursion.

Day 6 Lunch at a watermill

Today we will have a very special lunch at an ancient watermill, which has been turned into a rustic restaurant. Be prepared for a feast of food and drink, as you work your way through the authentic Italian tasting menu, sampling more than ten dishes. All these will be washed down with wine and Limoncello.

Nice, set against a backdrop of blue skies and sparkling sea, is the chic capital of the French Riviera. This is where our optional tour begins today. We'll visit the Place Massena, the largest square in the historic old district, which is home to impressive fountains and stunning Neoclassical buildings with red-coloured façades. Recognised as a national monument of France, we'll also see St Nicholas Orthodox Cathedral. Consecrated in 1912 with the support of Tsar Nicholas II, inside is housed a vast collection of icons and decorative works of huge historical value.

Later, we head inland to the charming medieval village of St Paul de Vence, built on a rocky outcrop and surrounded by ramparts. A stroll around the Old Town reveals a maze of charming streets, shady squares and beautiful views of the Bay of Nice.

Today it's time to say goodbye to your fellow travellers as your holiday comes to an end. Meals included: B

The hotel Toscana is situated in the seaside resort of Alassio, 80 meters from the beautiful beach, and a few minutes from the famous historical centre. Facilities include a restaurant, bar, live music three times a week and a wellness area with gym. The restaurant offers a varied menu using local produce, as well as ingredients arriving from their farm in Tuscany; vegetarian and celiac menus available. Rooms have tea and coffee facilities.